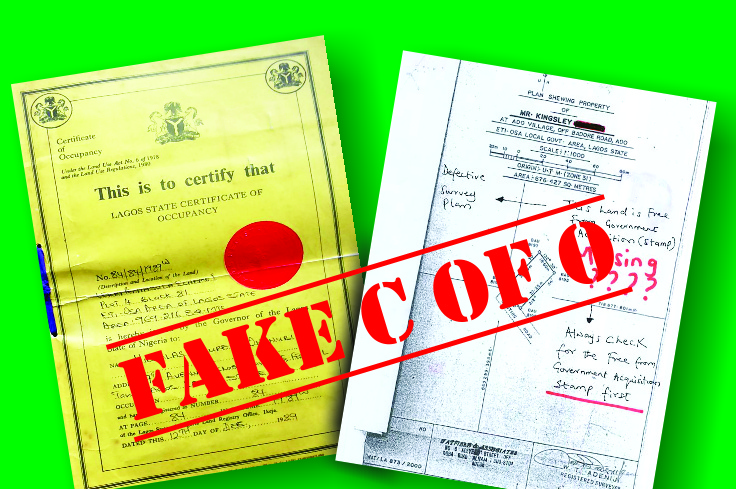 Using Lagos state as a case study, seven out of ten property documents on the streets of Lagos are clones and used to advertise the sale of landed properties with little or no suspicion of its falsity by prospective the buyers. Based on this, prospective buyers are unable to confirm the veracity and genuineness of this cloned title documents conduct proper searches at the land registry at Alausa, Ikeja because they do not consult with legal professionals and other experts in real estate sector. They just accept the face value of whatever is shown to them and go ahead to make the purchase instead. (See our article on incomplete documents to know the different types of title documents).

A thorough investigation should be carried out by prospective landowners or investors at the Lands Registry or any other registry in Lagos State depending on the type of document being shown will help to determine the status of such land before purchase.

As the popular saying goes“if anything is too good to be true, then it is not true”. Getting a piece of land already in the market without checking the vendor’s story and documentation is a disaster waiting to happen. We must also be wary of some people who parade themselves as property consultants claiming to be experts in land verifications. Most of them are unqualified and do not take the necessary steps to protect their client’s interest. In some cases, they may have been compromised by the vendor to approve the search/investigation knowing fully well that they are sending their client off on a journey that will never end with a knife in his back. In some instances, once these fraudsters are hinted that you may find out their tactics and expose their fraudulent dealings, they will just bid you goodbye and tell you somebody else with quick fingers had already brought the land.

In order to curb this fraudulent system of land sale especially practiced by some of these fraudsters who pose as land speculators especially the traditional rulers in their traditional institutions, the Lagos State government resolved to ensure that only authorized representatives of towns, villages, or settlements in the state apply for excision of lands owned by communities under acquisition or revocation in Lagos State.

It is interesting to also note that some government officials are also privies to information about the existence of cloned title documents emanating from their offices and still go ahead to confirm the authenticity of such forged documents if the enquirer does not insist on seeing the Gazette or transaction history of the land. These dubious land speculators also go to the extent of falsely claiming that acquired government lands belong to them or their family with fake land titles documents as proof thereby defrauding unsuspecting members of the public.

Sector operators and lawyers contend that litigation in respect of land can arise from several points of disputes which are as diverse or multifarious as the facts and circumstances of each case. Land litigation, for instance, may be engendered by discordant issues between concerned parties over declaration of title to land; the quantity of land sold or bought; argument over boundaries of the land; who has exclusive possession of the land; which party of equitable title and legal title has priority over the land; validity of sale of family land; partitioning of family land; and validity of disposition of communal land.

Don’t be a victim of either an Omonile Land scam or fraudulent real estate developer. Get in touch with Omonile Lawyer and we promise to help prevent you from losing your hard earned millions to crooks.