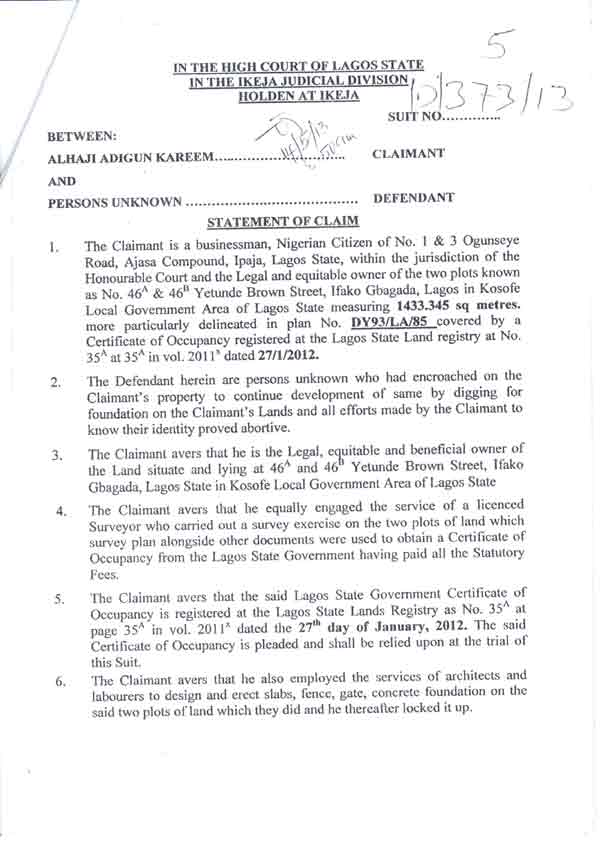 All that piece and parcel of land at  46A AND 46B YETUNDE BROWN STREET IFAKO GBAGADA LAGOS MEASURING 1433.345 SQUARE METERS

The Statement of claim alleges that the Claimant bought the above named land situated at  46A AND 46B YETUNDE BROWN STREET IFAKO GBAGADA LAGOS MEASURING 1433.345SQUARE METERS from the Akerele Family in Ifako Gbagada and perfected his documents hereby procuring a a Certificate of Occupancy registered as Number 35A of 35A in Volume 2011 dated 27/1/2012 and built a face with a gate to protect it from usurpers .

He later traveled out of the country for 2 years with the hope of coming back to finish building on it only to returning back home to find out that his land has been encroached upon by unknown trespassers.

He further states that the Omoniles  have taken over his land by reselling it to another group of Unknown persons who had since changed the padlock on his gate and were seen digging foundation on his land.

He further claims that he had been denied access to build on his land peacefully because of the new encroachers whom the Omoniles resold his land to and he has gone to court to get a restraining order against them.

Thousands of Nigerians that have bought land in Lagos are well conversant with this experience the claimant is complaining about in his suit filed against these faceless trespassers of land.The question is how do you secure a land you have just bought and travel in peace for one year or two with the hope of meeting your land the way you left it.

This is a very difficult problem Land owners face because these Omoniles are always patrolling the areas to see if a land is vacant or unattended to with no occupier even if you have built a fence and put a gate there to secure it.

The best advice i can give someone here who has bought a land and has fenced it and wont be in the country for a while is to get a security guard to stay inside and watch over the place while you put sand and gravel in the middle and you write across the fences ' NOT FOR SALE" and the names of the contact address to get in touch with in case any prospective buyer who isn't aware that the land has been sold intends to buy the land under a  fraudulent misrepresentation by the Omoniles.

Avoid buying Land in this disputed area till the matter has been determined by the courts. If you buy a land here you will be buying a law suit because the matter is still in court. Make sure if you come across  46A AND 46B YETUNDE BROWN STREET IFAKO GBAGADA LAGOS  you investigate it properly to know whether the land you intend to purchase is not in court so that you can buy the lands peacefully from the true owner.