MORE MAIL: I am Interested in Buying a Land but i have been told that the Owner of the Land isnt Around and is based Abroad. Do i still Proceed with the Transaction without meeting him? 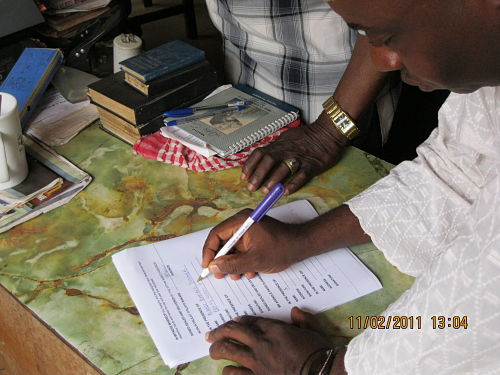 To be honest this is a very tricky question but from my experience I would say NO. Because we live in a society where land fraud is very prevalent. It’s even more difficult to proceed with a land investigation when the Owner isn’t available talk less of paying money to someone you cannot ascertain.

But if you are still determined to still go ahead with the transaction make sure you follow these tips so you won’t be defrauded:

A. Continue to pester the agent or the seller why can't he come over to conclude a transaction? If he is receiving close to N2Million or more and his plane ticket isn’t more than N250,000, why can’t he come down to Nigeria for a day or 2 to identify himself and pick up his check?

B. If the Seller continues to provide excuses why he can’t make it down, ask him for a copy of his passport and a letter from his bank that he is an account holder of whatever bank he intends to lodge his check or cash

C. Ask him to provide all the copies of the documents of the land and hand them over to your lawyer to check it out such as the receipts of the land whom he bought it from, the deed of assignment, survey plan and if possible the building plan.

D. Compare Signatures from all the other documents and if possible try and meet a relative of the seller to compare notes to trace the history of the person selling the land to you.

E. Force the Seller to swear an affidavit or draft a power of attorney duly stamped by a commissioner of oath that he is the true and legitimate owner of the property and give your lawyer to examine and confirm its authenticity.

I was faced with this dilemma early this year when an Omonile Lawyer Reader was interested in buying a land in the Ajah environs. He had inspected the land and he was very happy with the land and did his survey search to confirm it was a good land.

When it was the turn for the agent to provide the documents for further scrutiny, he said the owner was in Ireland and stated that the Owner in Ireland will only release the title documents only if the Omonile Lawyer Reader pays the N4 Million naira into his account first and then he will sign the documents for the Omonile Lawyer Reader and send it back via DHL if I prepare the deed of assignment.

I queried the arrangement because it made no sense to me. I hadn’t seen any document either real, photocopy or imaginary from the Seller except through phone calls and he was demanding immediate payment even before he signs the documents.

The Seller began to proffer reasons that he didn’t want his time to be wasted by idle land speculators and if they were serious they would pay the money and he will honour his own part of signing the documents.

I told the Omonile Lawyer Reader, that was pure rubbish talk and if the so called seller was ready, he will do everything possible to prove to me that he was the authentic owner before I endorse it.

Because I was proving too difficult by not bending over to accept such nonsensical reasons, the Sellers agent was able to coerce the Omonile Lawyer Reader that I was delaying the transaction and other people were interested in the property and that the Seller in Ireland wasn't interested in Selling to the Omonile Lawyer Reader again because I was too ‘rude and problematic’. ( I am only difficult, rude or Problematic when i smell a fraud and i don’t care what people think about me from that moment on...Whatever!)

The Omonile Lawyer Reader then systematically pushed me aside and hired another lawyer to handle the transaction for him who was ready to Hob Nob with both the Agent and the Seller and he ended up paying the N4Million to the Seller who in turn signed the deed of Assignment.

4 or 5 months later, he started to do his Fence when 2 rival parties came to the land to prevent him from working. Apparently the land in question was a land in dispute and has been in court for 6 years now and the Omoniles were fighting a Wing Commander in the Air-force over that piece of land.

The Real Story was that The Seller in Ireland some years back was sold a very Fraudulent and defective land by an Unsuspecting Omonile and he too didn’t know the land was under dispute and he had no title to the land when he bought it.

The moment he knew the land was very defective he quickly put it on the market to dispose of it fraudulently that’s why he didn’t have any paper to prove ownership because there was none from the very start.

He now called me some few days later when he realized he had been Scammed and pleaded with me to assist him to find a solution. I simply ignored him and advised him to use the lawyer he used for that transaction and he told me that one too has been evading him and not picking his calls .

He cannot even take the matter to court or the Omoniles because he has no right by mistake to the land because he failed to do the right thing and exercise patience. Buying land is not like buying Gala on the road. It takes time, patience and experience to conclude a landed transaction especially in Lagos

So the key point for the above question include:

1. Don’t settle for less from a Seller abroad that you cannot see physically. Make sure he or she ticks all the boxes and don’t ever do anything without a lawyer. Its too dangerous.

2. The burden of proof for the Seller abroad is far higher than one in Nigeria. Make sure he double satisfies you that he is the real owner by demanding everything you need to confirm authenticity.

3. If the Seller gets hostile or angry that either you or your lawyer is being a pest to demand for documents that are public records, please walk away and look for another land. God didn't destine that land as yours and the more you push it the more a disaster awaits you.

4. If possible if the Seller is in a country or vicinity that you have a person, friend or relative that stays there, send the prepared deed drafted by your lawyer to that person so that he carries the document to the Seller so that he can put a face to the person signing it.

<< Previous
4 Types of Deadly Land Taxes that Could Bankrupt you if your not Aware of them before you buy land
NEXT >>
Beware of Buying Land in this Area! Case Study #1: OKUN AJAH