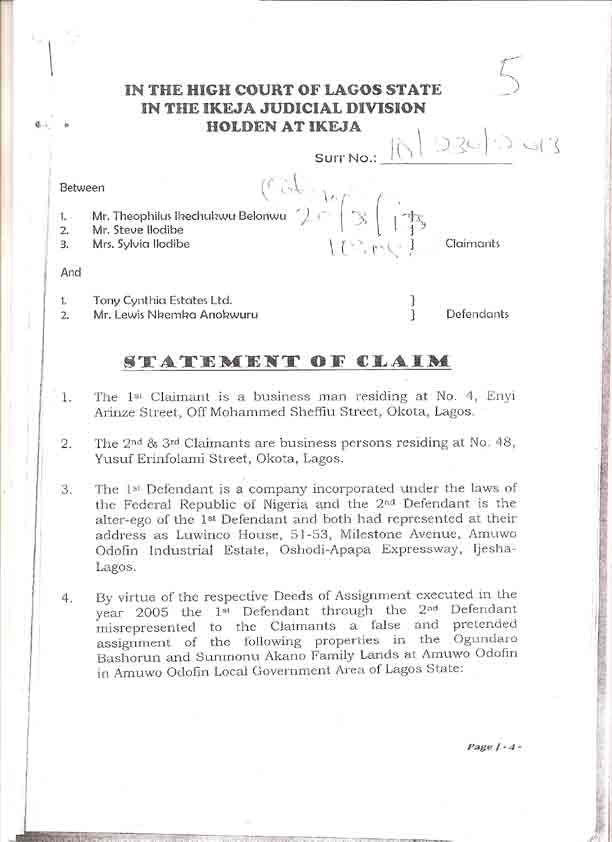 All that piece and parcel of land at OGUNDAIRO BASHORUN AND SUNMONU AKANO LANDS AT AMUWO ODOFIN in Amuwo Odofin   Local Government.

The Claimants further claimed that after they erected a fence to take possession of the property they bought from the defendants, they were now bombarded by a plethora of lawsuit with respect to that particular land from different quarters such as the Lagos State Government and the Chairman of the Ifelodun local government and while that case was still going on.

Another set of people and companies in 2009 also contested ownership of that same land in dispute against the claimants and in 2010 again another set of people contested ownership of this same land and brought concrete evidence that the land belongs to them by virtue of a Certificate of Occupancy granted to them by the Lagos state government in 1977.

The Claimants finally came to a conclusion that they did not have a good title to the land from the beginning and accepted the fact that they have been fighting fruitlessly to keep a land that they did not validly own from the start and the numerous law suits on the land were seriously overwhelming them plus draining their pockets to the tune of N20Million paid to solicitors to defend the various law suits.

This is a very sad case and it exposes the peril of buying a land without proper search which could lead to the loss of Millions of Naira. Although we haven’t heard from the defendants, there are some questions I would like to ask all parties to the suit to explain how this land mess got to this stage.

1. Why was there no search from the beginning to ascertain the proper owners?

2. How did the land get transferred to the Defendants aka who sold the lands  to them before they sold it  to the Claimants?

3. What role did the Omoniles play in selling the lands to the defendants? Was it done legally or fraudulently?

5. Where were the original alleged owners of the land who claimed they had a Certificate of Occupancy 28years after it was issued by the Lagos State Government and have allowed so many parties encroach on that land to lay claim to it without securing the lands?

6. Why didn’t the defendants assist the Claimants to help them fight against other Litigants trying to lay claim to those lands?

7. Do the defendants know the effects of an Indemnity clause in a Deed of Assignment and why they can be held liable?

Avoid buying Land in this disputed area till the matter has been determined by the courts. If you buy a land here you will be buying a law suit because the matter is still in court.

Make sure if you come across the OGUNDAIRO BASHORUN AND SUNMONU AKANO LANDS AT AMUWO ODOFIN in Amuwo Odofin Local Government you investigate it properly to know whether the land you intend to purchase is not in court so that you can buy their lands peacefully.