What if Omoniles have actually stolen your Land and have Resold it to another person who has started building? What can you do to prove ownership? 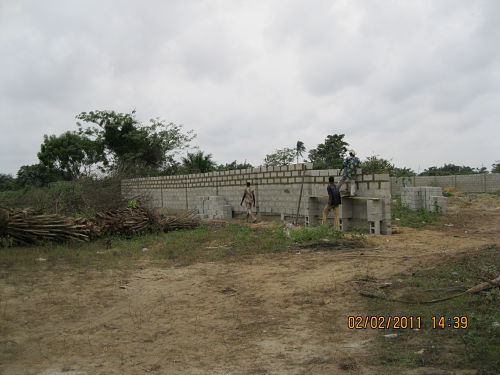 What to ask yourself?

What if you are already a victim of Omonile and you have already being been defrauded off the land you saved Millions of Naira to purchase or you just discovered that your land has been sold to 2 or more people, or the documents that you possess concerning the title to that land has been discovered to be forged or fraudulent, or you have left your land unattended to after you bought it and the day you decide to go and clear the grass you see another person has started foundation work on your land or even the land you bought legally with no complains at all and when you begin work, your workers call you that somebody has brought some thugs to pursue your workers claiming true ownership of the land and the person is banding around an old purchase receipt given to him by the family head he bought from in 1978 etc?

How do you solve this mind destabilizing issue instantly and beat these dubious criminals in their own game?

In short you have all come across these kind of stories either personally or heard about them from either a family member, friend or colleague and most of them have either given up or abandoned the land to fore go the millions spent to purchase the land and they have moved on quietly to count their losses with regrets and lose faith in purchasing lands.

Well it shouldn’t all be like this because now I will show you some of the legal remedies you have when such issues like this arise with some personal examples to aid you. Now I have to warn you here that most of these remedies have been successful 85% of the time.

There are some that end up badly but this is just a guide and aid to assist you to prevent such an issue happening and if it is presently happening to you, follow some of these steps and God willing your land or something better should come back to you.

FROM OUR MAIL BOX QUESTION:

I JUST BOUGHT A LAND AWHILE AGO AND 6 MONTHS LATER I GOT A CALL THAT SOMEBODY HAS ENCROACHED ON MY LAND AND THAT PERSON ENCROACHING IT, IS CLAIMING FULL OWNERSHIP OF THE LAND THAT I LEGALLY PURCHASED FROM ONE AJAMGBADI FAMILY MEMBER AT LANGBASA IN IBEJU LEKKI LOCAL GOVERNMENT WHO TOLD ME THEN WHEN I WANTED TO BUY THE LAND THAT IT WAS HIS FAMILY LAND AND IT HAS NEVER BEEN SOLD TO ANYONE.

THE OTHER PARTY THAT HAS NOW ENCROACHED MY LAND IS TELLING ME ANOTHER FAMILY REPRESENTED BY ONE AJANAKU OF THE AGBALAGBI CHIEFTAINCY FAMILY IN THE SAME LANGBASA IN IBEJU LEKKI LOCAL GOVERNMENT IS CLAIMING TO BE THE FAMILY HEAD AND HAS PREVIOUSLY SOLD THE SAME LAND TO HIM 9MONTHS AGO AND HE TRAVELED TO THE UK TO GATHER MONEY TO DO HIS FOUNDATION.

NOW THE TRESPASSER IS BACK TO CLAIM FULL OWNERSHIP OF THE LAND. WHAT DO I DO? I HAVE INVESTED MY LAST SAVINGS IN THIS LAND AND I DON’T WANT TO LOSE MY MONEY AND LAND. I AM CONFUSED! WHAT IS THE NEXT STEP I SHOULD TAKE TO RE-CLAIM MY LAND? PLEASE ADVISE ME OMONILE LAWYER!!!

ANSWER: Before you take that matter up with the police station or attempt to go to court that your land has been trespassed upon by an Usurper, you must first check yourself and the documents you possess as proof of ownership to know whether you have the following right documents to aid your case:

A. An Omonile Family Receipt from the Accredited Family Head and witnessed by both the Family Secretary and Principal Member stating their Family name and the date the Land was bought including the location of the plot of land, amount and known Family address.

C. A Valid Survey Plan showing all the Beacon Numbers, the Survey Plan number, the name of the Surveyor who surveyed it, the Year it was Surveyed including proof of Lodgment of the Red copy at the Survey-General’s office.

D. Mode of Payment both through a Bank Check or Draft and including witness to the Transaction.

This is the Position of the Law that was established in The Supreme Court Case between NWOKOROBIA V NWOGU IN 2009 where it was stated that one of the Ways to prove ownership of title to land is by Production of Documents of Title.

What this means is that for you to prove that you have a better title over the person claiming ownership of the same land, you must have a lot of Documents to boost your claim of Ownership of that land better than the other person.

There was an Omonile Lawyer Reader I assisted to buy 2 plots at Okun Mopo Ibeju last year owned by a particular Omonile family branch. They were the toughest I have ever encountered.

Over the years they had sold lands to various people and issued them only family receipt and nothing more. They were so ignorant about their lands that they didn’t even know their lands had a Government Excision.

Anyway, apart from the receipt, they issued no other form of documents to back up the Buyer’s claim and even a Survey plan wasn’t something they recommended. They would normally demarcate lands using Bamboo sticks to show which land they sold and the ones separated.

I fought with them for weeks with the aim of educating them that apart from the Family Receipt, they should acknowledge a proof of receipt of the money via a Bank Draft. My demands caused Wahala because they were used to collecting Millions of Naira in CASH so that they would share the money immediately amongst themselves.

Using a Bank was a Taboo and I stood my ground for them to accept payment via a bank draft and acknowledge it. Also I finally forced them to sign a deed of assignment. In fact this one was akin to the Iraq war. They refused wholesomely because they weren’t used to such protocols.

They abused and rained insults on me as an ‘ ALAKOWE LAWYER, LAWYER TOO GOOD, MR PROTOCOL ETC’ I wasn’t deterred and made sure I finally had my way and the Omonile Lawyer Reader had all the documents he needed.

They collected another 100,000 Naira for the signing of the documents and the Omonile Lawyer Reader complained bitterly about that extra 100k and that i should have just taken the receipt and walked away.

Little did he know 1 year after that the ‘LAWYER TOO GOOD’ stubbornness of mine will come to assist him. When another person came from nowhere to lay claim to his own land saying that’s where the Omoniles gave him, he could only produce a receipt showing payment for one plot of land.

That one plot was not described or defined in any way and he couldn’t trace the exact person who signed the receipt for him and when we got to the police station, we tendered our deed of assignment from the family directly, the survey plan showing the exact specification and location of the land, a signed copy of the acknowledgement of money and official receipt including a copy of the Excision tracing the land to it and counter signed by the Cabinet Office at Alausa plus a picture of the Family receiving money and signing the documents.

The other party was weak and kept on studying our documents till he gave up and promised to come back to shoot all the family members if they didn’t return his money. What killed the other party’s claim to that land was the lack of production of Documents to title.

If he had all his documents intact and was as thorough as me, he won't have had this problem. So please get all your documents intact so as to aid your case tomorrow in case there is any dispute on your land.