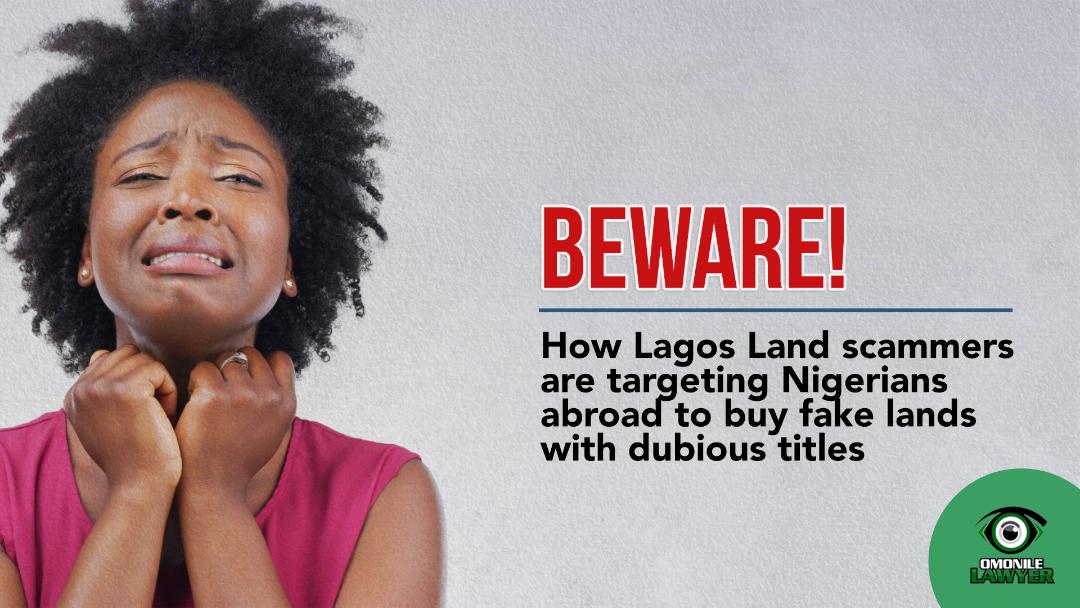 Nigerians abroad who want to buy lands or houses in popular areas in Lagos such as Lekki, Ibeju Lekki, Ajah, Epe, and Ikorodu, etc are at the mercy of fraudulent real estate agents, dubious developers, and wayo real estate companies, crooked omo-oniles and dishonest sellers.

They have no one to tell them the truth about the genuineness of the land or house because of the distance between them and the property they intend to purchase.

These Nigerians abroad can only rely on the pictures, and videos the scammers send to them and word of mouth guarantee from the seller that the property is legit but meanwhile it is all a scam. The land or house has many problems associated with it such as:

These Nigerians abroad who have worked very hard for their money believe these cock and bull stories and end up paying for these wayo lands without verifying the title.

At the end of the day, when the buyer outside the country realizes that he or she has bought a wuru-wuru land, the dubious seller knows that Nigerian abroad cannot cause wahala because they cannot fly down from abroad to fight the land case.

The scammer knows the worst the Nigerian abroad can do is to threaten, bark, and shout on the phone. At the end of the day, no land or house and no refund. Case closed. Unto the next abroad mumu who wants to buy a land or house from abroad without verifying it properly.

For example, we received an email from one Folake living in Houston who is a victim of a popular real estate company marketing an estate in Ibeju Lekki.

She was advised to pay in full so that she would get her own allocation but it has been more than 1 year now since she paid without getting any allocation for her property or refund. She regrets not verifying the real estate company to save her money.

Another man named Mr. Osagie living in Kent called to tell me of his experience buying a parcel of land that was recommended to him by an Agent in Lakowe.

He was told that the land was close to Abijo GRA and it had no issues. He said he wanted to fly down to see the location and the seller but his job prevented him from doing so and he had to rely on the pictures and videos of the agent.

He spoke with the alleged Owner on the phone and transferred ₦14,000, 000 to the Seller. The seller helped him get a lawyer who drafted the documents.

He said when he came back home 6 months after the purchase, he was shocked to see that the location of the land was opposite the Abijo GRA and was far inside the Abijo community with only villagers there and no visible amenities.

He later discovered that the land itself was a committed land that belonged to the government and he could not build on it. All efforts to get the seller and agent proved abortive and he had to abandon the land and fly back because of his job.

A third complainant Mrs. Awuse a nurse living in Dublin is now in big trouble with her bank because she took a huge loan to buy fictitious acres of land along Monastery road towards Mopo Ibeju believing them to be genuine lands close to the beach not knowing the lands were not available for sale and belonged to the Oba of Lagos.

The developer marketed the lands for her as an investment deal that should not be passed. She actually flew down to Lagos to see the location of the land but due to time constraints she could not agree on the fee.

Weeks after she got back to Dublin, the developer told her that her price has been accepted. She ended up transferring over ₦88 Million Naira to the developer for 2 and a half acres of land.

She presumed since she had seen the land and the developer, the lands were genuine only for her to receive an email from an agent that connected her to the developer that the area where her land was located had been taken over by policemen and officials from the Lagos state lands bureau.

Because of her job, she could not come down immediately so she contacted her relative who coincidentally knew me because we had worked together and I had saved her millions from land crooks.

Her relative was very angry with Mrs. Awuse for not letting her know she was about to pay for unverified lands and at the end contacted me to look into the matter.

Unfortunately, there was nothing to look into. The lands belonging to the developer actually belonged to the Oba of Lagos and the Lagos State Officials came there to cordon off the area from trespassers.

There was nothing I could do. End of story. A simple search would have discovered this wahala and saved Mrs. Awuse ₦88,000,000. The developer to date has not refunded her money and the matter is just going up and down with no end result.

Nigerians living abroad should not be victims to these real estate con artists that would do anything to make you part with your hard-earned foreign currency.

Buying a land or house back home is a good thing that every Nigerian outside the country desires to do but it should be done with smartness, intelligence, and caution so that you don't fall victim to dubious property scammers.

Don't fall for videos, flyers, pictures, or wonderful verbal reviews by the agent, seller, or developer. Shine your eye. Na Nigerians we be. If they can scam Oyinbo anyhow, why do you think you are not their next target?

Don't squander your money. Verify the next land or house you intend to buy with Omonilelawyer to avoid stories that touch the heart. Don't lose your hard-earned money to land swindlers in this economy by purchasing a house or land with a Wayo Title document! The pain, stress, anguish, and grief would be too much for you to bear.

Omonilelawyer is an expert in detecting their wayo, scams, and tricks used to defraud you. Don't be their next victim. Shine your eyes or lose your life savings.

The choice is yours!

See you in the comments section.