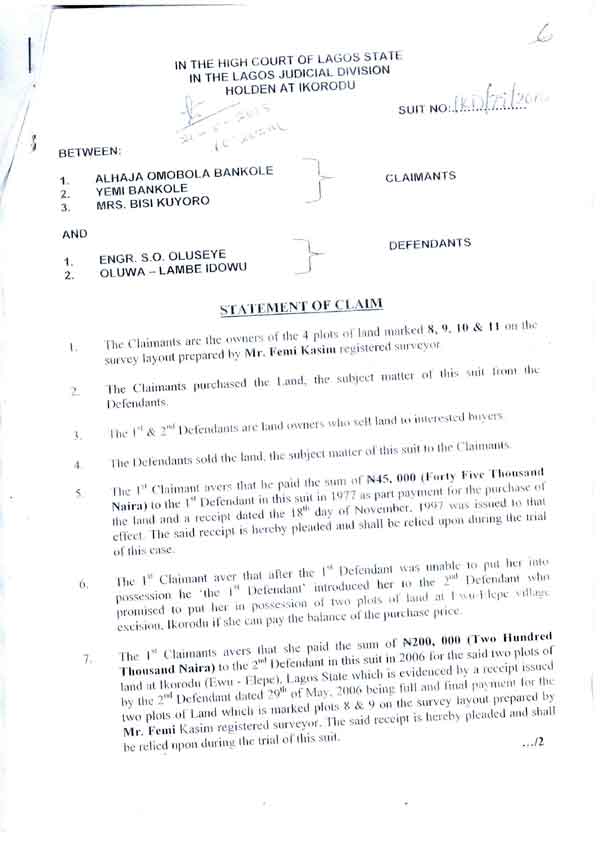 The Statement of claim allegedly filed by the claimants state that they bought lands independently in 1977 and in 2006 from the above named defendants who issued receipts to them individually for 4 different plots from a Layout Survey plan he showed them but since the moment they paid for the lands, the Defendants have not put them in physical possession of the land and since then have been evading them to give them a concrete reason why they have not given them possession of the lands they paid for.

I Have read this statement of claim over and over again and there are some issues i have picked out that requires both parties to shed light on:

1. It shows the Claimants bought the lands without investigating it

2. No property lawyer was involved in the transaction process

3. No body confirmed the existence of the survey plan layout that was paraded around to allocate lands to the claimants?

4. No deed of Assignment was every prepared in the Claimant's name till the man passed away

This is just wrong and it has given these Omoniles the opportunity to do dubious things with these lands without putting the buyer of the land in possession.

Avoid buying Land in this disputed area till the matter has been determined by the courts. If you buy a land here you will be buying a law suit because the matter is still in court. Make sure if you come across  All that  4 plots of land located at IKORODU LOCAL GOVERNMENT being portion of EWU-ELEPE VILLAGE EXCISION, you investigate it properly to know whether the land you intend to purchase is not in court so that you can buy their lands peacefully.