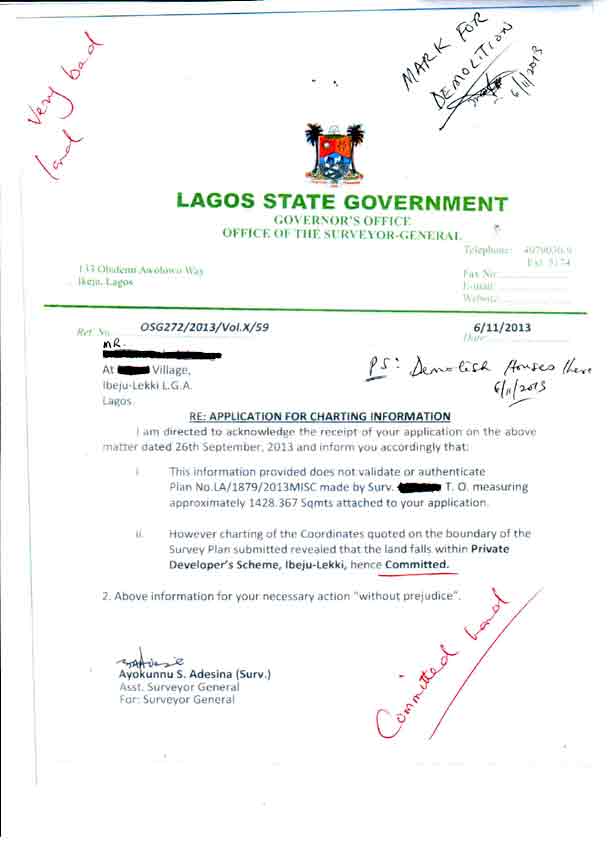 Whenever I try to educate people about the hazards of buying land without conducting a verification, I get a lot of reproaches, accusations and unpleasant comments from people ( Mostly dubious individuals to be honest). Some go as far as saying am a harbinger of bad news or creating mere fictional stories to scare people. With this in mind, I have decided to reluctantly expose the foolishness of one client (Name withheld) for attempting to purchase land without going through due process to verify a land. I will also show you the result of purchasing that property.

The first thing that happened was that he called me to inquire about my Omonile lawyer land verification services and I told him everything we do, the cost for investigating the land and advise we give clients on whether to purchase the land or not. The moment he heard the cost of the search as N70,000 he began to criticize me of trying to extort him and offered to pay less for the search.

I politely refused to reduce the fee because the N70,000 is a subsidized amount that covers the cost of paying all the relevant authorities and interested parties at the Land Registry to get the true information as regards the land in question for search. I told him spending N70,000 to prevent issues on a property worth N700,000 and above cost him nothing but a wise investment to avoid lamenting in future. He told me the price wasn’t worth it. He said he would investigate himself and purchase the land when he is ready. I wished him well in his endeavours since he probably knew more about investigating defective lands in Lagos than me.

7 months later he called me that he had purchased a Land for N8Million and I should help him draft the deed of assignment and other relevant documents. I candidly refused to do it and told him I would never ascribe my signature to a document that I know nothing about especially a land I haven't researched myself. He later asked me to also get a surveyor for him to do his survey plan and I also refused to give him one because to me it was medicine after death approach.

He further attacked me for being a charge and bail lawyer that knows next to nothing and told me he could get any surveyor to draw his survey plan. He continued to berate me for being too negative based on the number of mansions located in the environment that he intended to buy and I wanted to deprive him of not living amongst his class of people. I humbly apologized for being a straight shooter and wished him well in his endeavours.

Recently, he was calling me hysterically whilst I was in a meeting and when I responded to one of the calls, he told me he was in big trouble. He said he wanted to apply for his C of O but he was advised to first do his Land Information at the surveyor general’s office. This is the result of the search is below:

THE KEY POINTS TO TAKE AWAY FROM THE LAND INFORMATION REPORT

He bought a COMMITTED LAND that had been allocated to a PRIVATE ESTATE to develop their own RESIDENTIAL ESTATE.

For those that are unaware of what a Committed Land is, I will give you a brief lesson on it. Lands for sale are either free from Government acquisition, Under Acquisition or Committed Lands.

A LAND FREE FROM ACQUISITION is a very safe land to buy because the Government has not acquired it and has no plans to acquire it in future to do a project. If peradventure the Government acquires it, you will be paid compensation because it was taken from you unexpectedly.

A LAND UNDER ACQUISITION IS PART BAD AND PART GOOD. Part bad because the Government has acquired the land for a future Use but due to SPECIAL CIRCUMSTANCES, the government might in its infinite wisdom decide to give the Land back to the community but in return, you are going to be sanctioned heavily for buying A LAND UNDER ACQUISITION by paying a lot of money to the government to RATIFY OR REGULARIZE THAT LAND before you can get documents to that land.

A COMMITTED LAND IS A BAD LAND. No stories and nothing can change what is coming or passing through that land. A Bridge, an Estate, an Airport or a project deemed worthy by the Government must take place on that land and no amount of bribery, coercion, pleading, settlement or crying will change the fact that the building on it won't be demolished.

The Land Speculators, sellers, agents and surveyor had hoodwinked the man into buying land that was Fully COMMITTED. He voiced to me that the sellers lied to him that the landowners were working day and night to get the excision on the land and it was currently undergoing processing at the land registry. He claimed he was shown papers to prove the excision was truly under process and went as far as providing an excision file number for him to cross-check it physically at the land registry. Little did he know that he was buying an extremely faulty land.

The survey plan presented to him initially allegedly owned by the Seller was drafted in a deceitful way to show the land was "free from acquisition" on the survey plan meanwhile his own surveyor that he hired just reproduced, copied and re-pasted the old defective survey plan of the seller not knowing it was a land belonging to a PRIVATE ESTATE who has been fighting the Baale of that community and Land Speculators for selling their estate lands without their consent. The Land Bureau at Alausa had also resolved to help the private estate to demolish all the houses, fences, foundations and any other structure found in that committed area. Billions of Naira worth of properties were to be demolished for flouting the Zoning rule.

"Today the client is requesting for my help and has promised to pay me anything to help him resolve this issue. Right now I don’t know where to start from. I cannot locate the Omoniles because I know they have used his N5Million to buy Sallah Rams and marry new wives. The lawyer that drafted the agreement is saying he was only contracted to draft the agreement and nothing more, The Agent has refused to pick his calls, The Seller is reportedly sick and has travelled out of the country for good, the Surveyor is saying he wasn’t contracted to take coordinates etc."

This is a very sad situation and I feel very bad the client chose not to investigate it properly due to his stinginess only to suffer a huge financial catastrophe in future. The lesson to be learnt here is to protect your life savings and your children's future so that you don’t dash Omoniles or fraudulent land sellers your hard-earned money. Conduct a land verification to give you peace of mind unless an unplanned demolition may happen to your beautiful house in future.