THE DANGERS OF BUYING AN “EXCISION IN PROCESS” LAND IN LAGOS 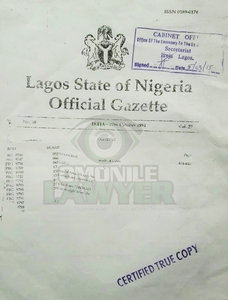 The most abused land scam gimmick today you hear from real estate companies, agents or marketers of land especially in Ibeju Lekki today is "EXCISION IN PROCESS". They claim that their lands for sale are undergoing "Excision Processing" and the property already has a "FILE NUMBER" to hoodwink buyers to purchase their lands. Continuous usage of these words "EXCISION IN PROCESS" and "FILE NUMBER" are employed by these real estate agents or marketers to scam buyers and make purchasers feel very comfortable to buy their lands. Whether they say it innocently or negligently, it's still a scam and buyers should beware of this gimmick.

The truth is that buying an "EXCISION IN PROCESS" or has a "FILE NUMBER" land is just as good as pouring petrol on your hard saved millions and burning it if you are smoking weed.  A property with its major title as "EXCISION IN PROCESS" and "FILE NUMBER" at the time of purchase to convince you to buy is not a good title and means absolutely nothing. To understand what an "Excision in Process" is, I would try to explain briefly what it means and how it has become the most fraudulently used word to scam millions of people in Nigeria today.

BRIEF HISTORY OF WHAT AN EXCISION REALLY IS 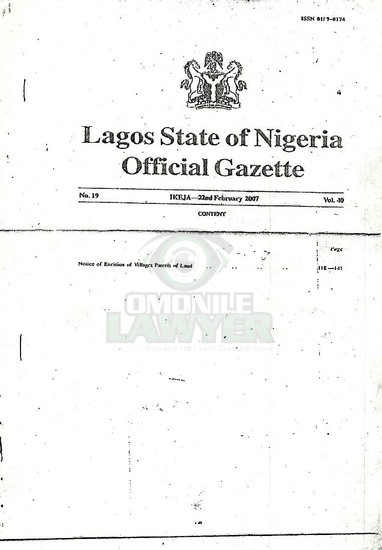 Every community/village in Nigeria more especially in Lagos has lands that have been in the community/village possession for thousands of years and have been passed down from generation to generation. These lands have been divided either per portion or acres to different families in the community. It's very easy to hear a certain portion of land (for example) totalling 10 plots belonging to an Odutola family or 20 Acres of land in that community belonging to a Balogun family. The custodians of these family lands are the senior members of the family usually the head of the family otherwise known as the "Olori Ebi" and other senior members such as the brothers, uncles or nephews who jointly administer how the lands are used, allocated or sold to outsiders. These custodians keep a record of these lands in their possession and ferociously ward off trespassers who attempt to take over their lands.

Before 1978, these family custodians could sell land to whomever they wanted and controlled who could own land in their community. Communities that were lucky enough to sit on solid minerals like Oil, Gold, Copper, Silver or cash/food crops exercised 100% control over these resources and it was very difficult for the government to take control of certain lands that had these resources without bickering over money, access to these resources and eventual compensation. All these changed in 1978 under Obasanjo who enacted the Land Use Decree (now known as the Land Use Act 1978).

The governor also recognized the problems with issuing everyone a C of O especially the host community that owned the lands and came up with a system that was suitable for all parties. If a community had for example 100 plots of land, it would agree with the families in the community to take a portion of that land for its own personal use to build essential amenities for the good of the public while the remaining plots would be given back to the community to do with it as it pleases and exercise full ownership. That division or partitioning of the lands is what is known as an "Excision" which means in English cutting a part of a whole. 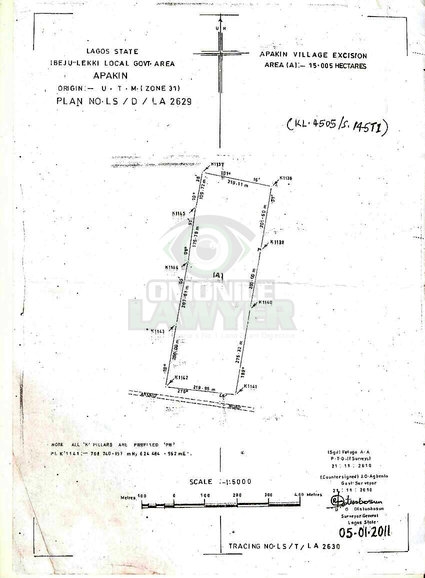 An Example of an Excision Survey after the government has divided the portion of land between the community and the government. A purchaser can only buy land within the area carved in the survey. Anything outside it not permitted.

In order to avoid that ambiguity between the lands that belong to the government and the ones that have been allocated to the community, the division or Excision of these lands is recorded in an official government journal that records every event. This journal is known as a GAZETTE. The Gazette is used to record the number of lands the government has taken in the community and the number that belongs to the community. It also states the size, location, number and position of these lands. It states the day, month, year, the page it was recorded and volume. It shows the exact location of the beacons establishing where the acquired government land starts and ends and also where the community land starts and ends. 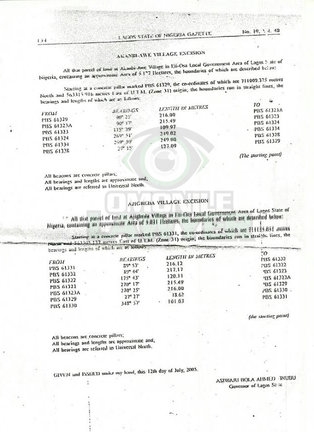 Example of how the Excision points have been demarcated by the government and published in the Gazette so thre would be no ambugity as to where the community lands given to them starts and ends.

While this process looks very straight forward between the Government and the community to divide or partition lands amongst their selves and officially record it in the Gazette, it is a very complicated process that takes a very long time to achieve. The process of excising a land between the government and the community, also known as an "Excision in process" faces so many difficult battles before an Excision is finally approved.

It's a very expensive project that requires the community to look for people to sponsor the project whereby they have to give up some of their community lands as some form of payment to achieve it. It requires intense lobbying of the government by the sponsor of the excision process on behalf of the community. Even if the government is ready to accede to the request of the sponsor to come to the community to excise or partition these lands, it would require getting all the necessary officials at the land registries and surveyor general's office to get involved to excise those lands.

"When they do all that, it would require the greatest hurdle of all which is the Governor of the State signing off to the Excision. Getting the attention of the governor to sign off on the excision is the toughest battle. Imagine the number of red tape and bottlenecks required to get to the governor to sign off on the excision! Can you just call Governor Sanwoolu out of the blues to read your file and sign off on the excision of a community? Easier said than done. Even if you end up getting Governor Sanwoolu to sign the Excision document, it would take time for it to be published in the Gazette to make it official. Can you see all the hurdles one must go through before an Excision of a community is granted?"

So imagine an Agent or Real Estate company that has no idea of the wahala that it entails to get an excision on a property openly blagging to a potential buyer of their land that the "EXCISION IS IN PROCESS" and you can go check the file number "FILE NUMBER" to con people to buy. Does that Agent or Marketer have access to Governor Sanwoolu to give you a definite answer that the excision is in process and it would soon be approved? When did checking the file number of a file equate to the Excision being approved? Anyone telling you to buy a land using that catchphrase "EXCISION IN PROCESS" or check the "FILE NUMBER" to promote land with no proper title deserves an uppercut from you. That's why there are thousands of buyers of land in Ibeju Lekki who have bought land over the years under the "EXCISION IN PROCESS" and "FILE NUMBER" gimmick that have no proper title documents or have the ability to process their title documents because they are endlessly waiting for the "EXCISION IN PROCESS" to be approved.

So when next you hear a property is for sale and the major government title they have is "EXCISION IN PROCESS" and "FILE NUMBER" without hard concrete evidence, please remove your slippers or shoes and Japa!!!! ( Runaway fast). Make sure you conduct a search properly before you buy your next land unless you could be buying a land that has Excision in process issues and you would be in the middle of the drama surrounding it with no hope of resolving it properly.