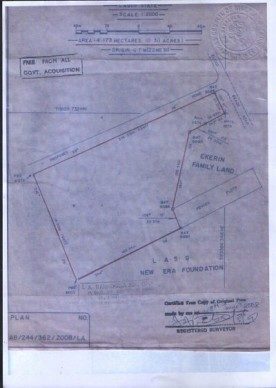 A Survey plan is a document that measures the boundary of a parcel of land to give an accurate measurement and description of that land. The people that handle survey issues are Surveyors and they are regulated by the office of the Surveyor general in Lagos as it relates to survey issues in Lagos.

A survey plan must contain the following information:

1. The name of the owner of the land surveyed

2. The Address or description of the land surveyed

3. The size of the land surveyed

4. The drawn out portion of the land survey and mapped out on the survey plan document

6. The surveyor who drew up the survey plan and the date it was drawn up

7. A stamp showing the land is either free from Government acquisition or not.

A Survey Plan to me is the most important document that you must ask the Omonile, agent or family that intends to sell the land/property to you TO PRODUCE.

This survey plan is what Omonile Lawyer would carry to the Land Bureau to do a geographical search  or take our designated Registered Surveyor to the land to pick out the coordinates of the land to compare at at the Surveyor general’s office  whether it is a good land or not. 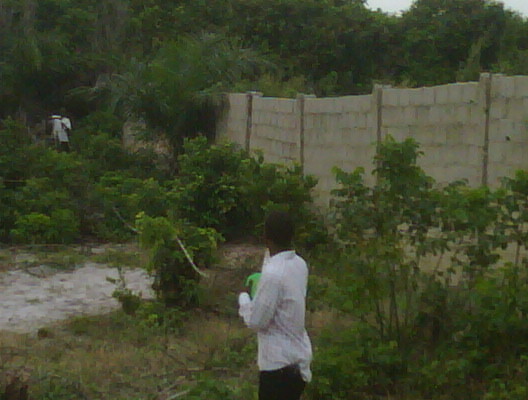 No matter how cheap or beautiful or strategically located a land or property is, once that property has been discovered to be designated for Government use in future, there is no point going any further to purchase it.

It will be a very foolish risk to attempt to defile the government and say nothing would happen, at least there are so many houses around or so many people have bought their own and nothing has happened.

Well for those who are conversant with the Lagos State Government's no nonsense approach in maintaining the master plan of Lagos, once your property is within that area that has being designated for future Government use, no matter how long it may be.

The plan must be carried out accordingly and your property will go down without any form of compensation because you failed to do the right thing by throwing caution to the wind. Examples include the 8 Lane Dual Carriage Way in Badagry that all the houses that were on that land were demolished, all the houses in Alimosho local Government that were near pipe lines, also in Idiroko,  ijegun etc! In fact remind me of the ones you know.

Also in Lekki Ajah, it’s even worse because there are some areas that have been specially acquired by the government for over 20 years and it’s just now that the government is trying to recover its lands. These areas are what are known as COMMITTED LANDS.

What You Should Look Out For

Once an area has been designated as Committed, it is the ultimate no go area to purchase a land. That’s where the government has committed those areas for Road expansions, future government estates or Government Reserved areas for major developments.

Don’t for once look at the houses around there as your guide to mean the government cannot demolish those houses, you would be shocked that the owners have 4 or 5 houses and can do away with that one and poor people like you and i that have no mouth to fight government will just be rendered homeless because of our stubbornness to buy at all cost there.

Remember you know where the shoe pinches and how much you have in your pocket. This is 2014 going 2015. Plan to save more money than to throw it away foolishly. Wink

The other option from Government is that if they choose not to demolish your house because it is sited on a committed land, they will end up giving you the option to come and pay Ratification. Ratification in this sense means you’re going to pay Government the full price and taxes it has pre-determined to be the cost of that place and its non negotiable.

So imagine you bought the land in 2005 for N2 Million in a committed area and in 2010, you now have to pay ratification also known as "Rat" at the cost of N5 Million to the Government. Does that make any financial sense to you? Imagine all the fears, rumors, prayers that you would be going through so that those caterpillars don’t come your way.

If and when the government decides not to demolish, they now ask you to pay Ratification in equivalent of  triple or quadruple the amount you bought it and remember the Omonile or Agent you bought it from would be nowhere to be found and if Found, would not in this life time refund or assist you in any way. 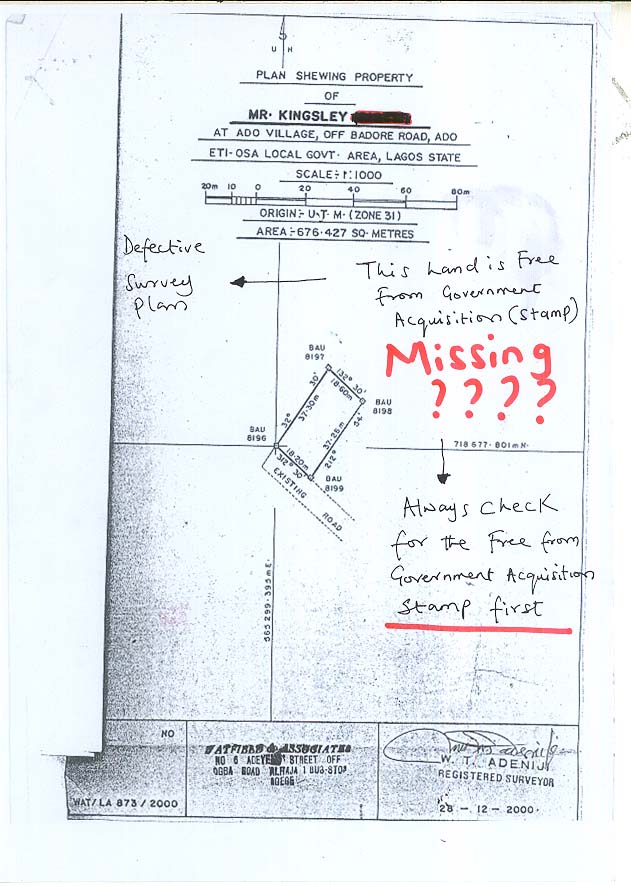 A very bad survey plan that was terribly drawn up and the land is under government acquisition. Please shine your eyes before you become a victim of buying lands that are defective because you failed to carry out a thorough background survey land check

Finally another advantage of the Survey Search is that if the land has been designated for Agricultural Purpose, you would know in advance. It’s mostly prevalent in Ikorodu, Badagry and Growing Rural Areas that are just cropping up.

Buying into a place designated for Agric is a major no-no! Except you Want Your immediate neighbors to be Cows, Fisheries and probably Obasanjo's Chicken farmers! Unless it has been designated for Residential or Mixed Development Avoid it pleases.

The summary is that the Survey Plan Search saves you alot of head ache at first before you even move ahead. And once you meet an Omonile or Agent who is extremely difficult with you in terms of not providing the survey plan on demand for search please my brothers and sisters, walk away quietly.

The signs are already there for you to know you’re about to be scammed. A survey plan is a public document and not a private cheque book, so you shouldn’t be bamboozled by people who tell you that the owner doesn’t want to release it because of security reasons. Trust me there is no reason.

As long as he is ready to sell, that is the first thing you get from them to know your status before proceeding.

Finally I am not a Surveyor in anyway and this information should only serve as a guide for intending land purchasers. You will be well advised to consult a Registered Land Surveyor to give you an insight into what they do and how they do it.

I am only talking about the roles Survey plan play as it relates to purchasing land in layman’s terms and why it is an extremely important document to have before, during and after you purchase a land in terms of Land Verification purposes.

<< Previous
How To Make Sure Money You Send From Abroad To Buy A Land Doesn’t Get Embezzled by Family members or Friends you trust
NEXT >>
Who Else Wants to Know How to Avoid Paying the Dreaded Omonile Signing Fees?