Why You should never buy a Land in Surulere, Onike, Aguda, Yaba, Ebutte Metta or Ogudu from Omoniles without Certified Lagos State Documents 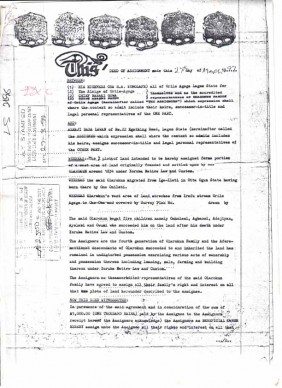 There is a popular scam going on in Lagos especially in Surulere, Onike, Aguda, Yaba, Ebutte Metta and in some instances in Ogudu where Agents or Land Speculators will show you empty lands in the midst of fully built up Houses and pass it up as lands being owned by Family members that have the right to sell these lands.

My fellow Omonile Lawyer readers, please be warned, this is not true and there is not a chance in Hell that these Omonile Family members are the real owners of these lands.

First and foremost you should know that these areas belong to what is now referred to as "OLD LAGOS" where most of these colonial masters settled in Lagos and the industrial expansion of Lagos Started from these areas and most of these listed areas mention above from way back have REAL OWNERS who derived proper C of Os or have Old deeds of Assignment and have  perfected their stamp duty fees on it hereby giving the  REAL OWNER a proper legal title to the land which has been recognized and has been duly registered at the Land Registry.

Now some of the issues linked to the success of this Scam can be traced to the fact that these Registered documents were obtained from the 1930s, 40, 50s, 60,70s or 80s and some of these documents have been lost in transit over the years.

The  REAL OWNERS  may have died and an intending purchaser  might not be able to trace their documents or these documents may have been passed on to their children who have partitioned the lands stupidly without following due process by selling it illegally to a third party purchaser who has no right to transfer the lands further to other future purchasers or the REAL OWNERS might be abroad and may have no idea that someone is about to encroach their lands to pass it off as their own.

To even make it worse, you see the Omoniles ready to sell these lands to unsuspecting buyers and when you demand what documents they have and intend to give to the new buyer, they tell you that your only going to give the intending purchaser a receipt for a land that has been in existence since 1950 without any reasonable proof or concrete evidence. 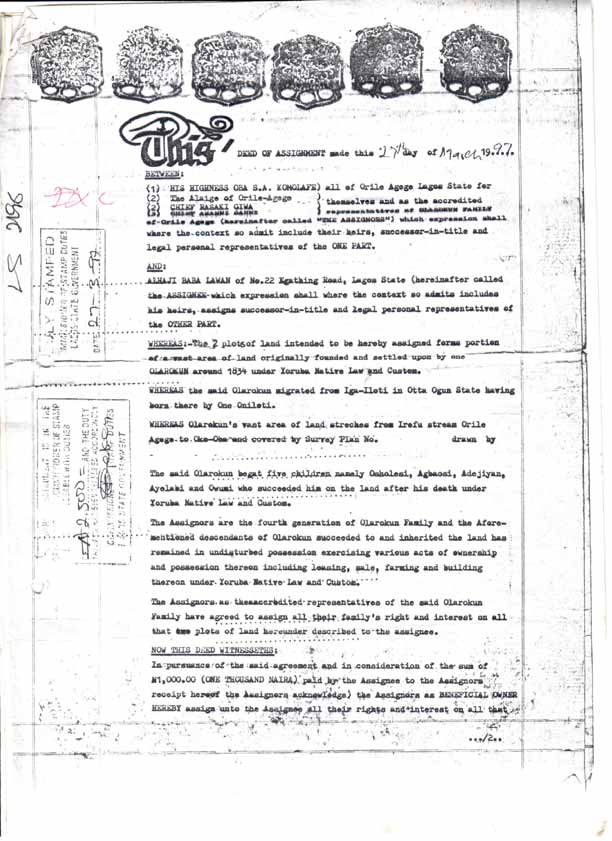 Sample Old deed of Assignment that belongs to an Original Owner of that land with all the Stamps of the Lagos state Government and Stamp Duty office. Without this Document as proof of ownership from the Owner in these areas mentioned above please do not buy it.

This is where the problem will arise for the prospective purchasers of these lands listed above when they want to perfect their papers in future. All the lands in those areas have been mapped out at the Land Registry and it shows all the previous owners of the land via the C of O they own.

Also other documents that prove ownership in their favor and you cannot do anything without the signature of that true owner of the Land that the Land Registry has in their records. No amount of begging or presenting an Omonile false receipt would sway the Government to perfect those papers for you because these Omoniles do not own the land and did not have the capacity to sell lands in those areas.

Next time you intend to buy a land in these areas make sure you do a proper search to determine the true owner of the land and don't fall for the trick that the land belongs to one stupid Oba of that area that would issue you a receipt for a land that already has a C of O. He has stolen somebody else's land which he is passing off as his own and you are only buying a future law suit if you fail to heed this warning.