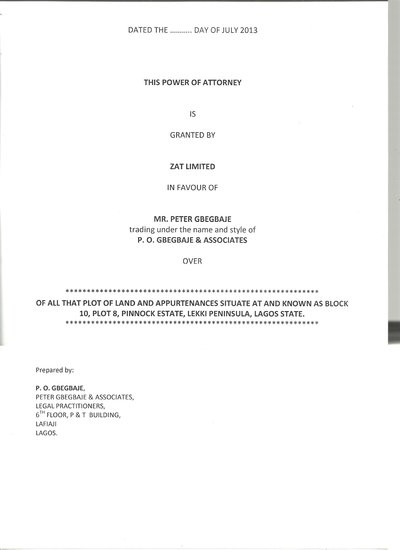 One of the reasons we see so many cases in court with respect to Land Disputes can be traced to this very Powerful but dangerous Document called a Power of Attorney or P.O.A.  A Power of Attorney is a written document given by Party A to Party B to carry out certain functions on behalf of that Party A within a specified period. Such functions and powers granted to Party B may include the power to sell, manage, buy, transfer, engage, refuse and administer the Property or Land of Party A till the expiration of the Power of Attorney.

A Power of Attorney is often granted in favour of a Solicitor or an Estate Agent to help manage, rent or administer a property for rent or lease and its a very common document that is used to get new tenants and collect rent on behalf of a Landlord. It becomes a whole new ball game when a Power of Attorney is granted to a Person to help SELL OR TRANSFER A LAND OR PROPERTY. This is where most of the Fraud we see in Landed Transactions take place.

Most Omoniles, fraudulent Solicitors or Estate Agents take advantage of the owner of that Person who has just granted them that Power of Attorney due to their Ignorance of how powerful this Instrument is. They deliberately make sure the Power of Attorney does not include the cost of selling the land and date it should expire but gives them the power to do and undo with respect to that Property.

The holder of that Power of Attorney will now brandish it in the face of any prospective buyer that he has the right to sell on behalf of the seller and the seller does not have to be present due to the Power of Attorney that has been granted to him/her. They quote ridiculous prices and act like overlords on these lands they have been given to sell on behalf of the Owner. They become very arrogant towards the Seller and even refuse to update or intimate the owner of the land of any new development that might affect the sale of the land. They technically become the owner of the Land and end up reselling the land to so many people using that power of attorney as a source of documentation to prove that they have the capacity to sell.

When a curious purchaser or someone who engages a Land verification specialist to investigate the Power of Attorney, they would come up with different stories why they cannot give the person the power of attorney to go and confirm its existence or whether it is registered. They become aloof and extremely irritated with your questions till you give in. Some real estate developers or companies especially in Ogun State, Ikorodu and Rural Ibeju Lekki are extremely fond of using this scheme to dupe prospective buyers.

A Sample of a Properly Drafted Power of Attorney. Read all the things that the Owner of the Property has Granted the Solicitor the Power to do.

To guide yourself from being swindled by Land scam artists using a Power of Attorney as a cover-up to perpetrate their crimes, You should be aware of the following so that you don't fall victim to these Douche bags:

1. A power of attorney is a bad title that should not be given to you without a better title such as a deed of assignment, Certificate of Occupancy, Gazette or Governor's Consent. If the Seller is relying on only the Power of Attorney as its only title, please just walk away.

2. The fact that he is Flaunting a Power of Attorney shouldn't mean that you  the Buyer shouldn't ask for the Owner of the Property to establish communications with him. You are entitled to engage in a telephone conversation or to meet face to face with the owner because that Owner of the Property is going to sign the documents not the person wielding a copy of the Power of Attorney.

Recently an Unpleasant story broke out in the news how a Lady Lawyer used an Old Power of Attorney to defraud hundreds of people by illegally selling the lands that belong to the Jokotade Family at Sangotedo Ajah. Despite the expiration of the Power of Attorney, she continued to effect transaction on behalf of some members of that Jokotade family to sell their lands and raking in Billions without remitting the money to the owners and after so many atrocities were discovered, the Family decided to take stock of the lands that they sold personally and those that the lady lawyer fraudulently used their expired Power of Attorney to sell and it put hundreds of Land owners in Jeopardy because the Family accosted these Land owners to pay another set of money running into Millions of Naira for illegally occupying their lands.

These owners of the lands claimed that they were sold these lands properly and they had copies of the Power of Attorney as a backup to show title. The families rejected this claim and despite the protestation of the Occupiers of these lands, they couldn't justify ownership of these lands because they were holding a defective title. This matter was so serious that it got to the Special Fraud unit at Ikoyi and is presently in Court. The people who bought lands from this lady lawyer are running from pillar to post now because they know they have been scammed through a Power of Attorney and those that even perfected their Documents with the land registery should be scared because the Governor might revoke them.

With this in Mind, You should learn to verify any Land before throwing our money away assuming everything is alright.