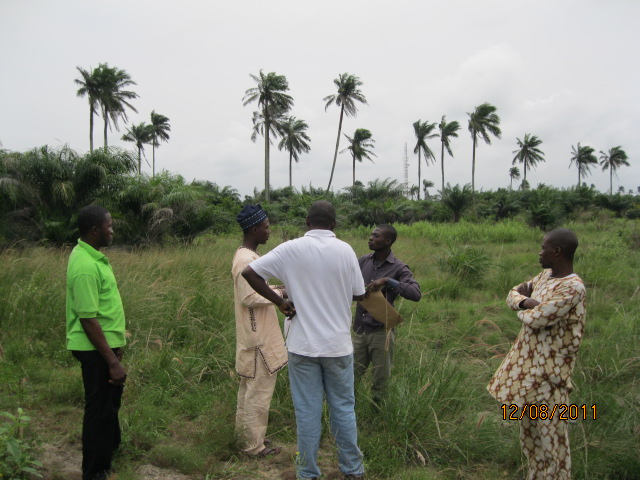 "The Above Picture is an Omonile lying through his teeth trying to deceive us that he is the Baale of that Eleko Community and all the lands there were under his care. He showed us a forged Baale i.d card,Community receipts, royal stamps and a Copy of the Eleko Village  Survey Plan  and Gazette.

He even took us to a small palace and convinced us to pay to him. Upon strenuous investigation, we found out that he was a Vulcanizer and not even from that community! Abeg Shine your eyes ooo"

Naturally when you hear something like this, you feel very comfortable and you want to buy a land because they tell you that your proposed neighbor is a staff of chevron or probably the special adviser to the commissioner has 3 lands here or has built his house there and has perfected his papers, but there is a problem with this statement!

A Popular ploy is to employ this tactic when they see the buyer is either in a haste to buy, or anxious to secure the land. It’s when they see the client is apprehensive that he might lose the land if he doesn’t pay at this instant to become close neighbours with the so called “Conoil cooperative people” that the Omonile or dodgy agent comes up with the real kill, which is telling you that the land for sale belongs to the Baale of the community.

The aim of telling you that all lands belong to the Baale is to give you that false sense of security that the lands are under the security of a Community ruler. The truth is that most of these Omoniles go around scouting for lands that have been unattended to or prime lands in choice locations that have been abandoned.

Because they know they don’t have the capacity to convince you that they are the owners of the land due to the fact that they cannot produce receipts or documents to prove ownership, they now tell you that the land belongs to the Baale.

They know you don’t have the audacity to start questioning the baale about the genuineness of the property and if he says yes he is the owner, then his word is law and acceptable.

The truth is that the Baale might not even know where the land is located. All he is interested in is the money to sign your documents that he will pocket and the probable foundation fees he would squeeze out of you but he will also re- direct you to pay the money to the Omonile that showed you the land and that you have no problems associated with the authenticity of the land. In short, you’re covered by him.

That statement and assurance is the ultimate false sense of security. You afterwards end up purchasing the land based on the recommendation of the Baale’s bogus security and when the true owner comes up to take his land, wahala will start.

The best the Baale will do for you is send his thugs to go and beat up the workers of the true owner but after you involve the law or police they will back off totally and leave you to your fate.

They will deny your existence or that deal until they finally agree to relocate you to a less desirous place after they have accepted they took your money when the police steps in.

At the end of the day, you won’t see any cooperative owner of land or big commissioner as your neighbor but staring at real time land hustlers who have just conned you off your money.

This happened early this year at Ikorodu. An Omonile Lawyer Avid reader saw a piece of land at Ikorodu GRA Extension advertised for sale.

Now he didn’t do any search what so ever and the Omoniles took him to a place adjacent to that GRA Extension and told him that the adjoining land belongs to staffs of MTN cooperative with the Cooperatives intending to buy more.

He was so happy that he had seen such a good land so he decided to pay Land and asked them who owned it. They told him that all the lands there belonged to the Baale of the town and they took him to their Baale’s palace.

That was how he paid on the spot at the Baale’s palace N2Million through a check to be cashed immediately and the Omoniles gave him a clean bill of health to start work.

4 months later as he decided to do something there, he found another person doing a foundation there, he attacked the person and found out that it was the same Baale that sold that land to the new person the second time.

The once charming and supportive Baale changed into a Viper and started evading our fellow Omonile Lawyer Avid reader. After almost 5 months of evasion to collect his money back, he decided to call me and I took the matter straight with the Police.

Upon investigation, we found out that the Baale did not even know anything about the land in question or had even seen it. He was just a lackey the Omoniles used to obtain money from the Buyer.

Efforts to locate the Omoniles afterwards have proved elusive and he cannot lay claim to the land because the Baale also sold the land fraudulently to the second buyer. He has lost both the money and the Land.

The Baale has been set free by the police and he is still going around reselling people’s abandoned lands and passing it off as his own.

QUICK TIP TO AVOID THIS SCENARIO

Never be bamboozled by big talk of sellers or agents claiming that a lot of big people stay there. Ask them to give you contacts of the big people that stay there and immediately you will see their faces change with such displeasure and shock that you had the audacity to ask. Immediately story will change.

If it was true that big men stayed there, they should be willing to take you there to meet the person or show you copies of his perfected documents

Also when they take you to a Baale, please do not be intimidated after the initial courtesies and respect. The fact that he is taking your money for land has reduced him to a business man and not an Overlord.

Quiz him to the last. The more he gets reclusive, angry, irritated and generally feeling uncomfortable with the questions being hurled at him, quickly realize something funny is going on and that’s your cue to get lost or forever hold your peace and see your cash drift away. If you can't do it, contact me or a property lawyer.

Don’t take things for granted when it comes to issues like this or you will cry later.

<< Previous
Do You Recognize the 8 Early Warning Signs of Buying a Defective and Problematic Land?
NEXT >>
MAIL TIME : “I Am Interested in Buying a Land in Lagos, What Steps should be taken to protect myself from falling Victim to Land Fraudsters?”