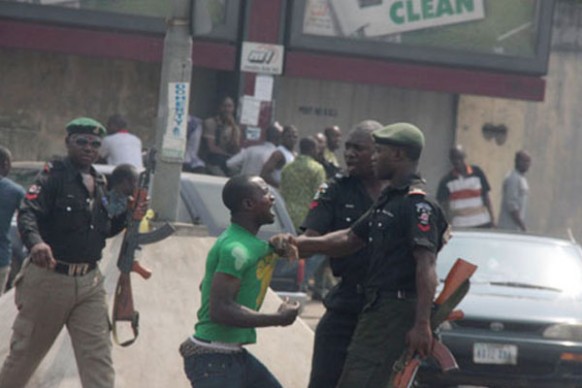 Hard times await Omoniles in Lagos who intend to defraud people off their lands by selling innocent buyers other people's lands and demanding foundation fees violently. I would attempt to break down the proposed law in a very simplified manner so as to know what this law stipulates and how to use it to your advantage against those bastards selling other people's lands.

The Lagos State House of Assembly,is proposing a 21 years imprisonment for anyone convicted of land grabbing. The bill stipulates that anyone who sells land to another person knowing that such a land belongs to a third party commits an offence and is liable to 21 years imprisonment upon conviction.

In the bill titled Law to Prohibit Forceful Entry and Occupation of Landed Properties, Violent and Fraudulent Conducts in Relation to Landed Properties in Lagos State, the lawmakers also proposed 10 years for any owner of a landed property who uses violence to seek repossession of his property.

The proposed law, which underwent public hearing on Wednesday 22nd of January 2014 stipulates that as from the commencement of the law, a person or group of persons are prohibited from using force to take over any landed property in the state.

“Any person or group of persons who, having used force to take over a landed property in the state…after the commencement of this law, commits an offence and shall, on conviction, be liable to a prison term of 21 years,” states Section 2, subsection 1 of the 17-section bill. 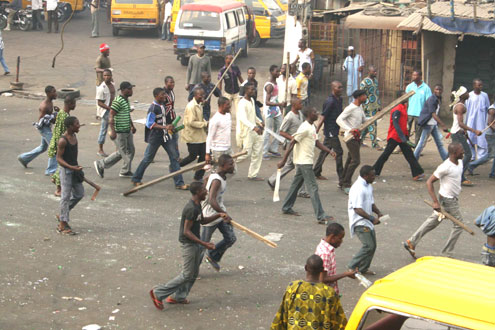 No more room for these Violent Rapscallions to invade other people’s land forcefully to resell them. They risk a 21 year jail term

2. OMONILE LAWYER'S SIMPLE EXPLANATION HERE IS THAT, IF YOU BELIEVE SOMEBODY HAS TAKEN OVER YOUR LAND AND YOU USE AREA BOYS OR POLICE TO FORCEFULLY REMOVE THAT ALLEGED TRESPASSER FROM THE LAND YOU ARE LIABLE TO GO TO JAIL FOR 21 YEARS. LEARN TO USE THE LEGAL REMEDIES AVAILABLE TO YOU. THIS LAW IS DIRECTED MOSTLY TO OMONILES THAT TAKE OVER PEOPLE'S LANDS FORCEFULLY. PLEASE DON'T BE PART OF THEM.

The law also stipulates a fine of N300,000 or a prison term of three months for anyone who trespasses into another person’s land and refuses to leave even when the original owner of the land obtains justice. It also bars the use of thugs, vigilantes or any other such group for the purpose of taking possession of a landed property in order to execute a court judgement.

3. OMONILE LAWYER'S SIMPLE EXPLANATION HERE IS THAT, ONCE THE COURT HAS GIVEN AN ORDER OR JUGEMENT THAT A LAND BELONGS TO SOMEONE AND THE PERSON OCCUPYING THE LAND THAT HAS LOST THE CASE STILL FORCEFULLY OCCUPIES THE LAND AFTER HE HAS BEEN TOLD TO VACATE BY THE COURT IS LIABLE TO PAY A FINE OF N300,000 OR SPEND 3 MONTHS IN JAIL.

Section 6 of the proposal states that, “a person who enters a property without lawful authority or reasonable excuse, and has in his possession any offensive weapon with the intention to cause mayhem in respect of the property commits an offence and is liable on conviction to 10 years imprisonment.”

4. OMONILE LAWYER'S SIMPLE EXPLANATION HERE IS THAT, IF YOU ENTER ANOTHER PERSON'S LAND AND YOUR TRYING TO CLAIM OWNERSHIP OF THE LAND AND YOU HAVE IN YOUR POSSESSION ANY KIND OF OFFENSIVE WEAPON SUCH AS MATCHETS, KNIVES, GUNS, BROKEN BOTTLES ETC TO TRY TO INTIMIDATE OR CAUSE WAHALA WITH RESPECT TO THAT PROPERTY, YOU ARE LIABLE TO GO TO JAIL FOR 10 YEARS. (MY ADVICE IS TO KEEP YOUR GUNS OR KNIVES AT HOME WHEN SORTING OUT A LAND DISPUTE FROM TODAY) 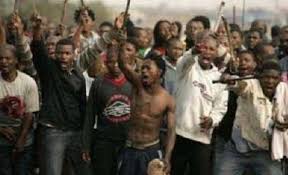 Using thugs to trespass on other people's lands with violent offensive weapons could land both you and the omonile in jail. use all legal means to get your land back and avoid using thugs or force

Section 7 (1) also forbids the sale of a piece of land to multiple buyers stressing: “any person who offers for sale, or sells a property knowing that he has no lawful title to the property or that the property has previously been sold by his privies; or who, as agent or attorney and, without lawful authority of the owner sells the property entrusted to him, commits an offence under this law and shall, on conviction, be liable to a fine not exceeding 100 percent of the value of the property or to imprisonment for five years or both.”

5. OMONILE LAWYER'S SIMPLE EXPLANATION HERE IS THAT, THOSE WHO ARE EXPERTS IN RESELLING OTHER PEOPLE'S LANDS TO MULTIPLE PEOPLE AND TRYING TO FEEL SMART SHOULD KNOW THEIR TIME IS UP. ANYONE SELLING ANOTHER PERSON'S LAND THAT HE KNOWS HE HAS NO RIGHT TO SELL OR HAS ANY DOCUMENT TO GIVE OR KNOWS THAT THE LAND HAS BEEN SOLD PREVIOUSLY TO SOMEONE ELSE IS LIABLE TO GO TO JAIL FOR 5 YEARS AND A FINE IN EQUIVALENT OF 100% OF THE VALUE OF THE LAND WRONGFULLY SOLD.

Its sub-section 2 forbids anyone from selling any family land or property or any part of it without the consent or the authority of the head of family or other accredited members of the family.

6. OMONILE LAWYER'S SIMPLE EXPLANATION HERE IS THAT, ANY OMONILE THAT SELLS A FAMILY LAND WITHOUT THE CONSENT OF THE HEAD OF THE FAMILY OR ACCREDITED MEMBERS IS LIABLE. THIS SECTION IS EQUALLY IMPORTANT TO PURCHASERS OF FAMILY LAND WHO JUST BUY LANDS FROM OMONILES WITHOUT CONSULTING WITH THE ACCREDITED REPRESENTATIVES OF THE FAMILY. SUCH A TRANSACTION WILL BE NULL AND VOID AND YOU WILL HAVE YOURSELF TO BLAME.

Section 8 of the law also states that it is an offence for any legal practitioner or other professionals, in the conduct of their professional duties, aid violent activities of land grabbers in the state. It stipulates six months imprisonment for such lawyers as well as “further necessary disciplinary actions as may be imposed by the Council of Legal Education.”

7. OMONILE LAWYER'S SIMPLE EXPLANATION HERE IS THAT, UNSCRUPULOUS LAWYERS ARE NOW IN DEEP SH***T!!! I KNOW SO MANY THAT COLLUDE WITH LAND SWINDLERS TO DEFRAUD PEOPLE AND HIDE UNDER THE GUISE OF CLIENT-ATTORNEY PRIVILEGE. THEIR TIME IS UP AND THIS SHOULD PREVENT LAWYERS FROM AIDING OMONILES TO COMMIT HAVOC IN LAGOS.

Section 9 of the bill forbids anyone from demanding a fee or levy in respect of construction, roofing, repair or restoration of any property or disrupting construction work. Such a person or group, according to the bill, commits an offence and upon conviction, would be liable to a fine not exceeding N200,000 or two months imprisonment or both. It vested the power to implement the law, when passed, on a task force under the state governor.

This is a very commendable proposal that i support 100%. My prayer is that such rhetoric and laws be matched with actions unless these Omoniles will just brush these laws aside and continue to wreck havoc without any repercussions.