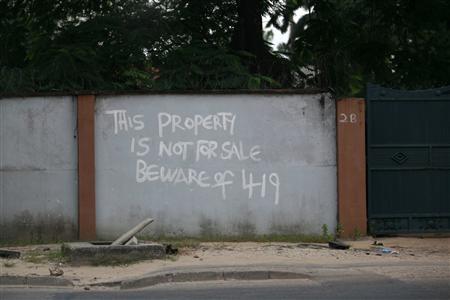 If you live in Lagos, you must be aware of the activities of land grabbers popularly referred to as “omo-onile” who have constantly taunted the public with their polluted habit of either selling a particular parcel of land to several persons.

Their activities have helped record a decline of investments in the real estate sector by investors in Nigeria particularly, Lagos state whose major concern is to avoid this unchecked habits of these land grabbers.

In a bid to curb this menace attributed to omo-onile that has bewitched the process of land ownership and acquisition, Governor Akinwunmi Ambode signed into law the “Lagos State Properties Protection Law” on 15th August, 2016 which is geared towards the prohibition of forceful entry and illegal occupation of landed properties, violent and fraudulent conducts in relation to landed properties in Lagos state.

The main objective of the law is to provide legal comfort and assurance to interested investors that they can carry on legitimate land and property transactions without fear of harassment, intimidation or unnecessary exploitation by these land grabbers.

The law is divided into 15 sections which protects the rights of land owners and criminalizes actions of forceful and unlawful entry and occupation of premises. According to the provisions of the law, land grabbers and illegal occupants may face a minimum and maximum of five (5) years and twenty (21) years imprisonment if convicted although, there are impositions of fines for all offences upon conviction depending on the direction of the court.

Some of the key provisions of the law have been discussed as follows:

Section 3 of the law provides that a person who, without lawful authority, uses or threatens violence for the purpose of securing entry into any landed property for himself or for any other person acting on his behalf commits an offence punishable by ten (10) years imprisonment.

And if any such person makes forceful entry with firearms, effective weapons or any obnoxious or chemical materials or is in company of any person so armed or wounds or uses violence on any person they shall be liable to an offence punishable by (4) years imprisonment.

Section 4 of the Law provides that a person who is occupying a property as an encroacher and fails to leave the property on being required to do so by or on behalf of the owner of the property commits an offence and on conviction shall be liable to a fine not exceeding five million naira or five years imprisonment or both.

Section 6 of the Law precludes any law enforcement agent, vigilante group, ethnic, cultural/traditional militia from having the right to execute the judgment of a Court in respect of any landed property except as may be provided for under the Sherriff and Civil Process Act or any other Law

Section 8 of the Law prohibits frivolous and unwarranted petitions to the Law Enforcement Agency arising from the provisions of the Law knowing such claims contained in the petition to be false.

The law therefore requires that a petition in respect of landed property shall be accompanied by a sworn declaration by a petitioner because a lot of people conjure different types of ‘title’ to the land that it takes due diligence and lots of prayers on the part of the purchaser not to fall into the wrong hands.

This practice is very common with family agents who unlawfully sell family property without the consent of the head of the family, some even issue counterfeited receipts. Thus, anyone who offers any property for sale with no lawful title to the property or authority of the owner to offer for sale commits an offence and is liable on conviction to a fine of five hundred thousand naira only or six months imprisonment or both.

Where he actually sells a property to which he has no lawful title which has been previously sold by him or his privies or without lawful authority of the owner, commits an offence and is liable on conviction to a fine not exceeding 100% of the value of the property or to imprisonment for five (5) years or both, and the property shall revert to the lawful owner.

Similarly, the law provides that any professional who executes a judgment of court without following due process as provided for in the sheriff and Civil Process Act or any other Law commits an offence and any such professional found guilty under the provisions of the Law shall be reported to the relevant professional body for misconduct and necessary actions.

Section 11 of the Law is by far the most popular provision of the Law. Anybody who has done construction work in Lagos and its environs has one tale or the other to tell about the notorious ‘omo onile’.

They are basically hoodlums who lurk around construction areas, charge developers for every tipper of sand/cement/gravel brought to site; then, at various stages of building, they throw in more obstacles and demand payment of huge sums before they allow developers lay the foundation, deck, roof, erect a perimeter fence, dig a borehole and just about anything!

In short, they fleece developers at every stage of construction and beat up their workers or prevent them from working if they are not paid and there was little or nothing one could do to stop them.

The menace of the ‘Omo Onile’, whose numbers have swelled in recent years amid rising unemployment in Nigeria, has discouraged investors, hindered businesses and held back development in Lagos state. This trend is what section 11 seeks to address.

The section precludes a person, whether for himself or acting as an agent, from demanding for any fee or levy in respect of construction activities on any property, disrupt or obstruct construction works.

Consequently, it shall not be business as usual for the ‘omo onile’ henceforth as any person who contravenes the provision of the section commits an offence and shall on conviction be liable to a fine not exceeding one million naira or two years imprisonment or both.

Section 12 of the Law establishes a task force to enforce the provisions of the Law and vested in it the power to arrest in pursuance of the law alongside any other Law Enforcement Unit/Agency in the State while jurisdiction in respect of offences under the Law was granted to the Special Offences Court and other courts.

From the provisions of the Law as highlighted above, it could be seen that this Law is the much awaited answer to a lot of the problems associated with land or property acquisition and development in Lagos state which ensures that properties and their owners are protected.

<< Previous
The Sad Demolition Story Of A Nine-Storey Building at Osapa London Lekki
NEXT >>
Joint Ownership of Land?- What they won’t tell you before you buy that land!